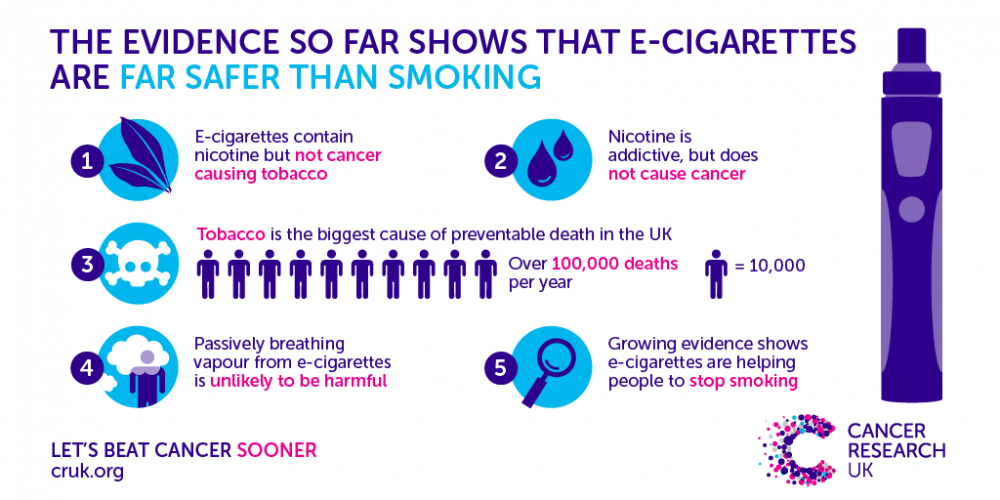 Has it ever happened to you to face direct and often provocative questions or even statements about alleged harmfulness of vaping? Did you start explaining the findings of all the studies you recalled at that moment and realize nobody was listening after three sentences?

We have. Many times. And it’s still frustrating.  That’s why we decided to try and collect all the potentially confusing frequently asked questions and statements about vaping  Not because these statements could be correct, but because the answers are often too complex to answer in a simple and quick manner if you’re unprepared.  Of course, we will try and find clear, simple and effective answers, which are true and supported by proper scientific research.

“Vaping is at least as harmful as smoking cigarettes”

Not true. Research has shown that vaping is at least 95% less harmful than smoking cigarettes. So far the research has not shown any relevant clear effects on health.

“By using an e-cigarette you are inhaling toxins”

Unlike with smoking regular cigarettes, we are inhaling vapour, not smoke. Since there is no combustion in e-cigarette, the vapour does not contain carbon monoxide and numerous other harmful products of incomplete combustion. Inhaling vapour has been proven to be a lot less harmful than inhaling smoke.

Partly true. Emission measurements have shown presence of some carcinogenic substances in e-cigarette vapour. However, these substances are present in far smaller or even trace quantities. Often these same substances are also present in other products or foods which we use every day and are proven to have no relevant effect on health.

It is true that there was a study conducted in Japan which showed high concentrations of formaldehyde and other carcinogenic substances in the vapour. The findings were later discarded due to improper methodology. The researchers used the “smoking machines” which literally burned the cotton in the heating coils and thus created harmful combustion products. In practice such use of e-cigarettes never occurs, as it is impossible to inhale such vapour.

E-cigarette liquid contains mainly different ratios of two ingredients – propylene glycol and natural vegetable glycerine. Both compounds have been known for a long time and are used in many foods and cosmetic products which we use daily. Many studies have been conducted and they have all shown that these substances are safe for consumption. It is true that propylene glycol is used in anti-freezing products, but that doesn’t mean it is harmful. In addition to these two substances, e-liquid may contain nicotine, water and flavours used in food industry. Only minor amounts of these substances are used.

Proven to be incorrect. While nicotine is responsible for addiction, scientific research has unequivocally shown that it does not cause cancer. Cancers are caused by carcinogenic substances in cigarette smoke which are products of incomplete combustion. In e-cigarette vapour, these substances are either present in trace amounts, or not present at all.

However, even though there is no scientific basis, the belief that nicotine is responsible for all adverse effects of smoking is deeply rooted in people’s consciousness.

“Why would the government adopt a law restricting and regulating e-cigarettes if they are so harmless?”

The government adopted the Restriction on the Use of Tobacco Products and Related Products Act because of the EU Directive which is the result of pressure from the WHO and some interest lobbies in the EU parliament. The pressures are the result of fear that e-cigarettes may potentially have long-term health effects which are still unknown to the science. Also, there is a fear that e-cigarette use could encourage adolescents to start smoking tobacco cigarettes. These arguments have already been refuted by later research.

“Only long-term studies will show the true harmfulness of vaping”

Not true, although it may sound like a good argument. All components of e-liquid have been well researched. The biggest unknown are the flavours which are already used in food industry. Long-term studies are essentially statistics – monitoring the probability of an illness in relation to vaping for decades. Since it is not really known what should be monitored (the subject of the research), and since it will not be possible to find a representative sample to be followed (sufficient number of non-smokers who use e-cigarettes for decades), it is likely that the long-term studies will never be conducted.

Also, let’s not forget that several millions of people have been vaping for more than a decade, and no relationship was found between vaping and occurrence of any illness.

Partly true. Vapour from e-liquid containing some creamy flavours contains diacetyl. It is also true that inhaling large amounts of diacetyl for decades causes bronchiolitis. However, the Food and Drug Administration lists diacetyl as a safe component of flavours, as there is no substantiated evidence that it is harmful in amounts inhaled.  Bronchiolitis is caused by long-term inhalation of diacetyl for decades. It has been proven that the amount of diacetyl inhaled with the e-cigarette use is approximately 750-fold lower than inhaled with smoking.

So far no cases of bronchiolitis as a result of smoking have been documented.

View all posts by ales →

Crusade Against Vaping E-Cigarettes is Catastrophic for Public Health

Photo: Tolga Akmen, AFP Author: Konstantinos Farsalinos Who would ever bet that products us

Responses to erroneous or misleading arguments of vaping opponents