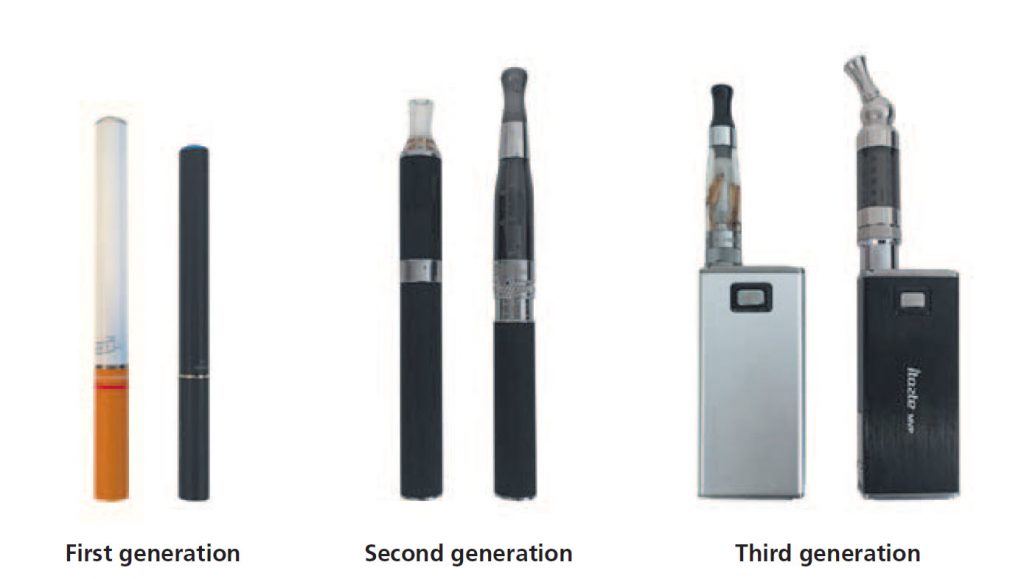 First generation e-cigarettes, sometimes called cigalikes, are designed to look like a cigarette and generally use cartomisers. When the user takes a puff (or presses a button on some models) a heating coil is activated to vapourise the e-liquid, creating a vapour that can be inhaled. Many first generation models have a light on the end of the device that also glows when a puff is taken. More experienced e-cigarette users (vapers) prefer to use newer (second and third) generation e-cigarettes. Often called personal vaporisers, these are particularly popular with people who have completely replaced their cigarette smoking with e-cigarette use.

Second generation e-cigarettes are typically larger and have a more powerful battery linked to an atomiser and a ‘tank’. The user fills the tank with their choice of e-liquid which may include flavours and contain nicotine in different concentrations. These devices often look like a fountain pen and can be used with a range of atomisers, cartomisers and tank systems. They typically use larger batteries and
may have adjustable power settings.

Third generation e-cigarettes are usually larger still with a more powerful battery and adjustable air flow. They also allow the user to adjust the voltage or wattage applied to the atomiser (often referred to as ‘variable voltage’ or ‘variable wattage’ devices). Some come with ‘puff counters’ or downloadable software that allow users to program their own voltage and wattage level, and to monitor their patterns of use. Third generation devices are designed to allow modifications and substitution of individual components according to user preference.